How to Make Coffee Without a Machine

I'm going to be honest here, and not to sound snarky or know-it-all, but it never occurred to me that there are people out there who don't know that making coffee does not require a machine.  I mean, folks have been drinking coffee for centuries.  How did they make it before Mr. Coffee existed?

This morning, when I was scrolling through FB, I came across a request for a "free" coffee maker.  The person posting the request stated that his had started smoking when he tried to use it.  Unfortunately, he didn't have any money "atm" (at the moment), and so he couldn't buy a replacement coffee maker, and he was just, seriously, jonesing for some coffee!  He was hoping that someone on the yard sale FB group would have a spare to give him.

I have been drinking coffee for most of my adult life, and for most of those coffee-swilling years, I have made coffee without a machine.  We use a French press, which is a pitcher, usually glass (ours is insulated steel - like a thermos), with a screened plunger attached to a lid.  The coffee grounds are put into the pitcher.  Hot water is poured over the grounds and the lid is put on the pitcher.  After about four minutes, the plunger is pushed down, trapping the coffee grounds at the bottom of the pitcher.

As an aside, the first time I saw a French press in use was on the reality TV show, Survivors.  They were off-grid on some tropical island somewhere.  Their French press with coffee grounds was a gifted "luxury" item.  They could boil water, and so they could make coffee.  No electricity or machine needed.

A local boutique coffee shop here makes "pour over" coffee.  There are several different types of apparatus one can purchase for making pour over coffee.  I think the coffee shop uses a CHEMEX style.  It looked fancy.

But the fact is that none of those things are required for making coffee.  All one needs to make coffee are roasted coffee beans that have been ground up; hot (preferably boiling) water; a filter of some sort to hold the grounds; and a vessel to capture the coffee.

When I was a very poor college student, I had a (really cheap) electric coffee maker.  It had a basket where the filter and coffee grounds went, and a carafe for the finished brew.  The water was poured into the aquifer at the back of the coffee maker.  As happens, the heating coil fizzled out (that's probably what happened to the FB guy's, too), and since the water wouldn't heat up, no coffee.

So, I took the basket off the maker and put it over the carafe.  Then, I boiled water on the stove and manually poured the coffee over the filter and the grounds.  The water dripped down into the carafe, just like it would have if it had been sent through the coffee machine.  And then, I had a nice cuppa.  I was having boutique pour over coffee before it became a thing.

But one doesn't have to do that either.

Since I no longer have a coffee maker, I don't have the basket and I don't have paper coffee filters, but I wanted to experiment using things I have right here around the house.

For my fancy pour over coffee, I used a (clean) cloth napkin and a reused pasta sauce jar. 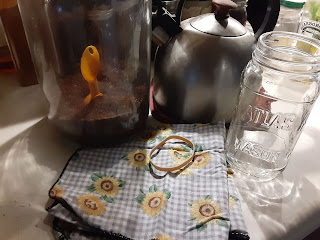 I folded the napkin into four layers so that the water wouldn't pass through the grounds too quickly.  I laid the folded napkin over the mouth of the jar and pushed some of it inside the opening to create a little nest.  I wrapped a rubber band around the excess on the outside of the jar to hold the napkin in place.

I added two tablespoons of grounds to the napkin filter in the jar.  The amount of grounds depends on how strong one likes one's coffee. 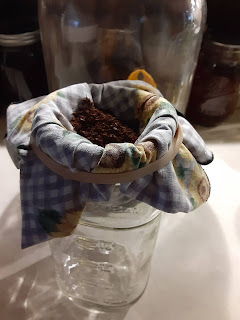 Then, I boiled some water and poured it over the grounds. 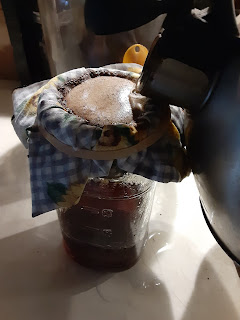 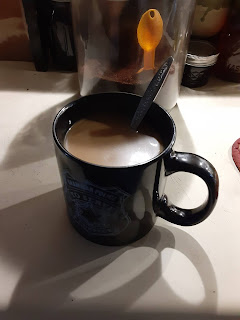 No machine.  No fancy equipment.

In fact, using this pour over method, if the water were boiled over an open fire (or on a woodstove, for instance), the only cost to make the coffee would be the cost of the grounds, which means, folks, when your power goes out, you can still have coffee.  All you need is a napkin, some hot water, a jar, and coffee grounds.

I considered sharing a link to this article on the FB group - so that the young man, who thinks he needs a new coffee maker to get coffee, can learn that he doesn't have to be limited by the belief that there is only one way to do a thing.  There's a lot of room for innovation and creativity outside of the box.

I love being able to create something from stuff I just have around my house ... and after 20+ years of living in the same place, I'm (almost) embarrassed to admit that we have a LOT of stuff.

Most people know that we have a backyard flock of suburban chickens.  They are pretty amazing for giving us eggs and helping keep the backyard tick-free, but since we give them layer pellets and scratch, we end up with a lot of spare feed sacks.

Back in my Granny's day, those feed sacks were made of cloth and were repurposed into things like undergarments for my dad and his siblings.  These days, the feed sacks are made from a (recyclable) plastic material.  Sure, it's recyclable, but as many of us are painfully aware, much of the "recyclable" plastic isn't being recycled.  It's one of the reasons we have looked for alternatives to things like bottled drinks.  Sure, we can return the bottles - out of sight, out of mind.  Right?  But the fact is that recycling is the last of the Three R's, because it's the least effective way to deal with our excess of "stuff."  Better is to reuse and/or repurpose.

And today, I found a new repurpose - a lunch bag.

Deus Ex Machina takes his lunch to work every day.  It's usually leftovers - because I almost always cook too much.  He's had a variety of lunch bags over the years.  The one we purchased for him the most recently (a couple of years ago, now) is starting to show its age in some not really great ways, and so I figured it was time to get him something new.

Making it rather than buying it is one of my favorite things, and so I decided I would try my hand at making him one out of an empty feed sack.

And it's tall enough that he could take multiple containers (one for salad and one for an entree, maybe) stacked neatly inside the bag.

It was a super fun project, and I'm thinking I will probably make a few more, because why not?

1.  The first step was, of course, to clean the bag, which was easily accomplished by wiping it down with a damp cloth to get the dust from the feed off of it. 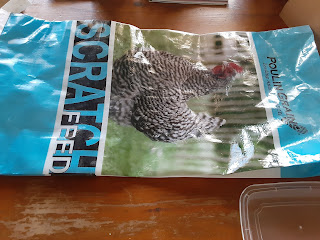 2.  Using the take-out container, I measured the sides of the bag.  As it turns out, the bottom strip on the feedsack was exactly the correct size, and so I just cut out the blue colored strip for the sides and bottom of the lunch bag. 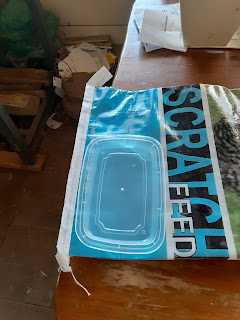 3.  For the front of the lunch sack, the picture of the chicken was the perfect size.  With the feed bag still, mostly, intact, I cut two pieces (front and back) using the chicken picture as my guide. 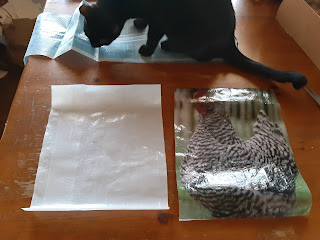 4.  With right-sides together, I pinned everything together and sewed a seam inside the bag, attaching the back and front to the side pieces. 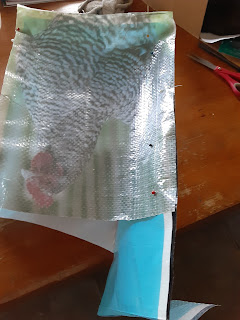 5.  I folded over the top edge and stitched a hem around the top.

6.  Then, I put a little stitch in the top corner of each seam so that the bag would sit square. 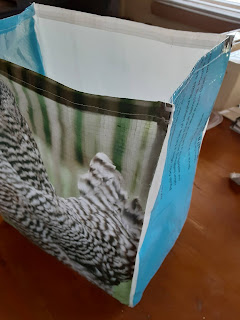 7.  Using one of Deus Ex Machina's old, worn-out, mesh belts, I made a couple of handles, and stitched them on. 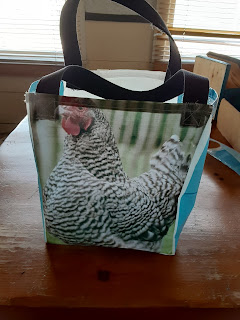 At worst, it's a fun conversation piece.  I mean, how many people have a picture of a chicken on their lunch bag? 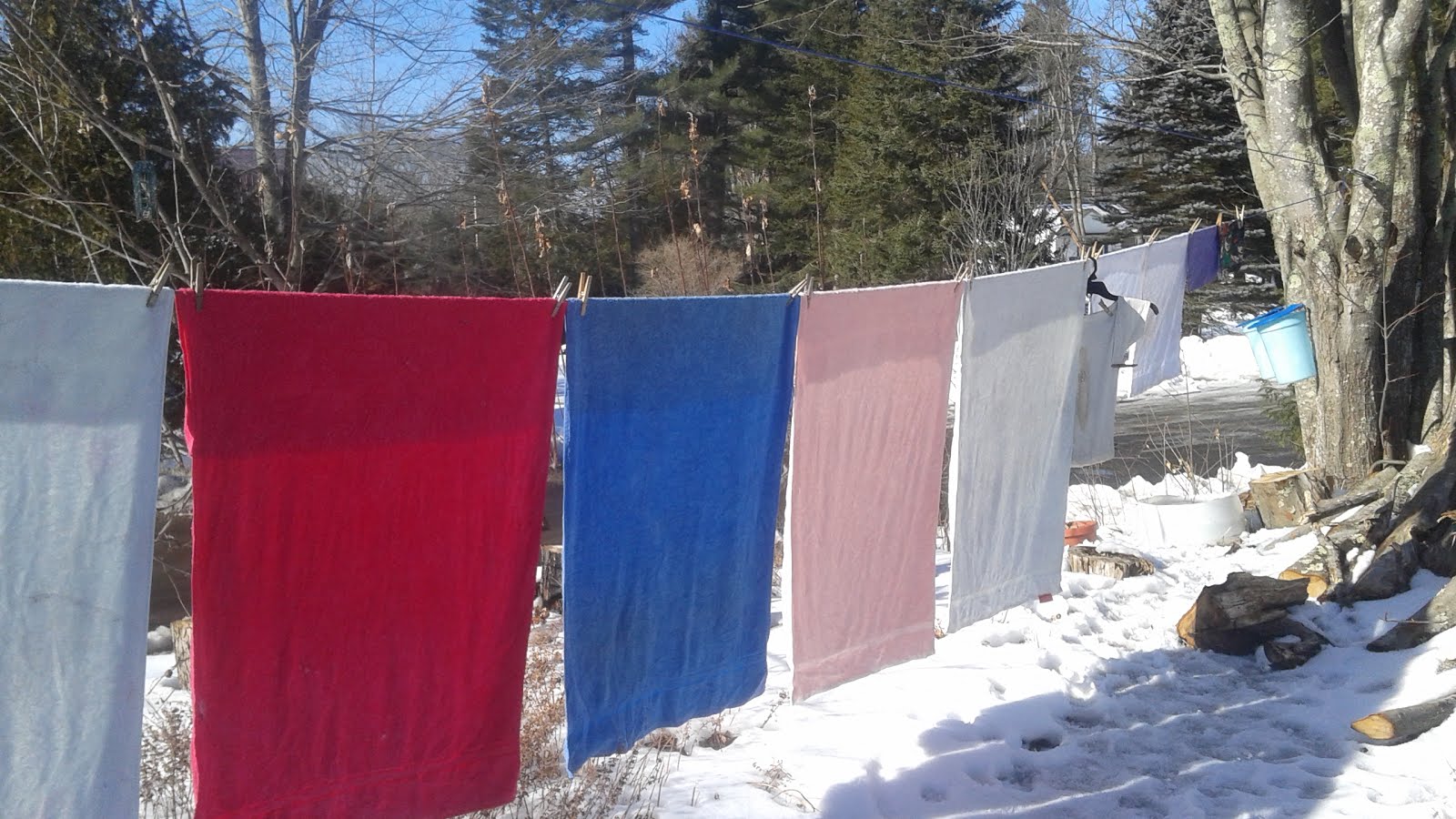 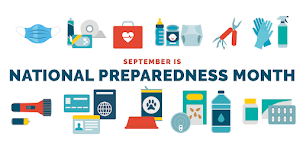 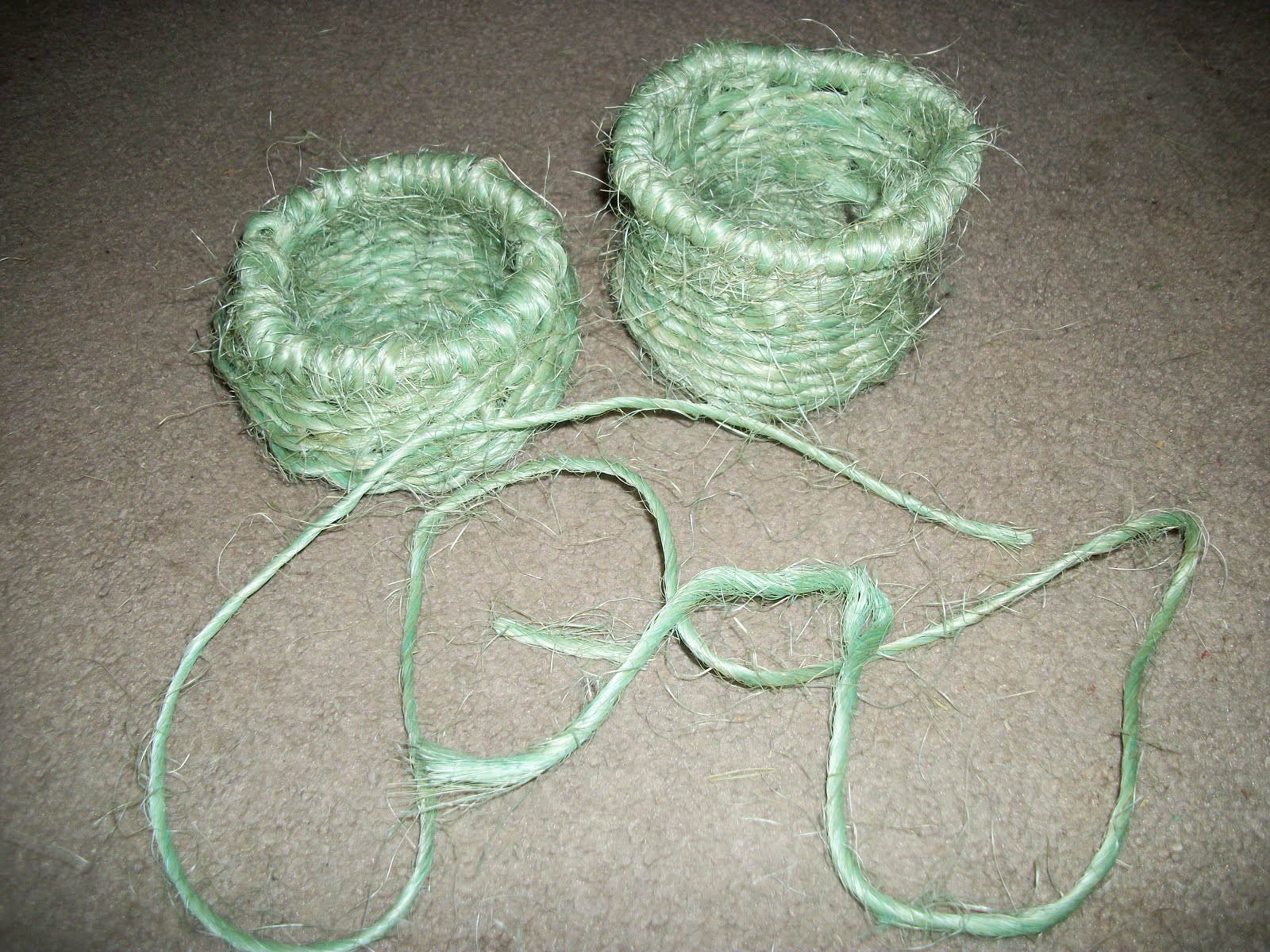 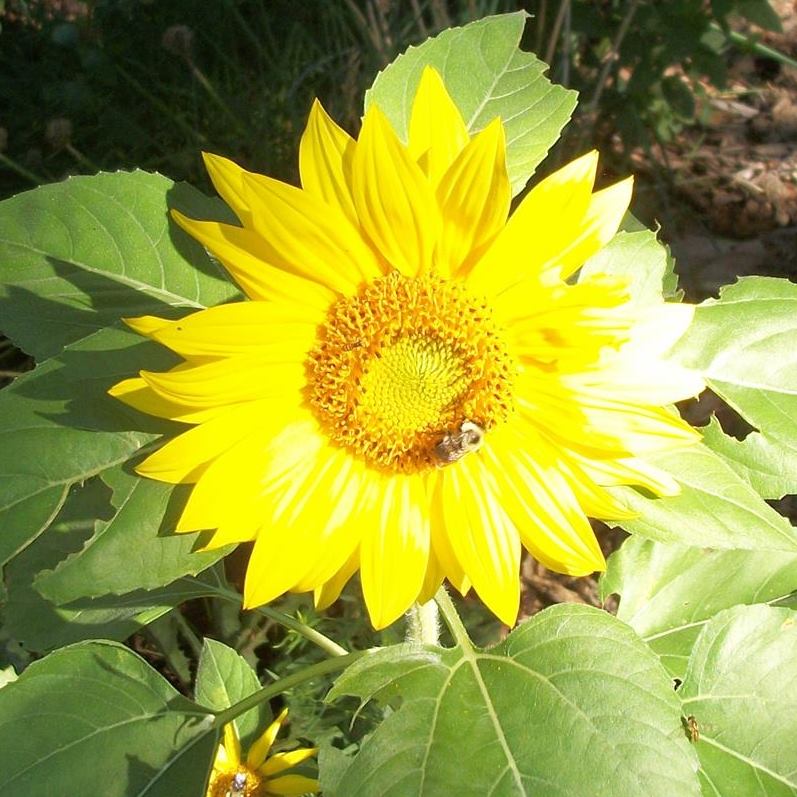 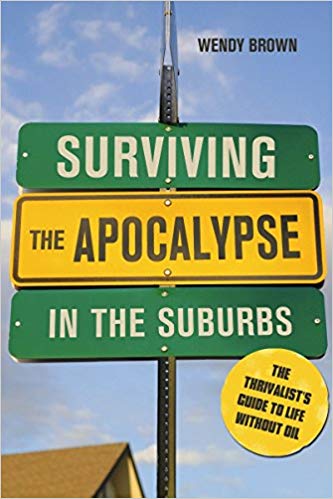 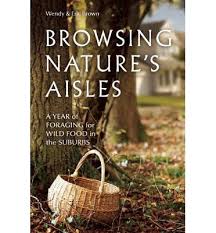